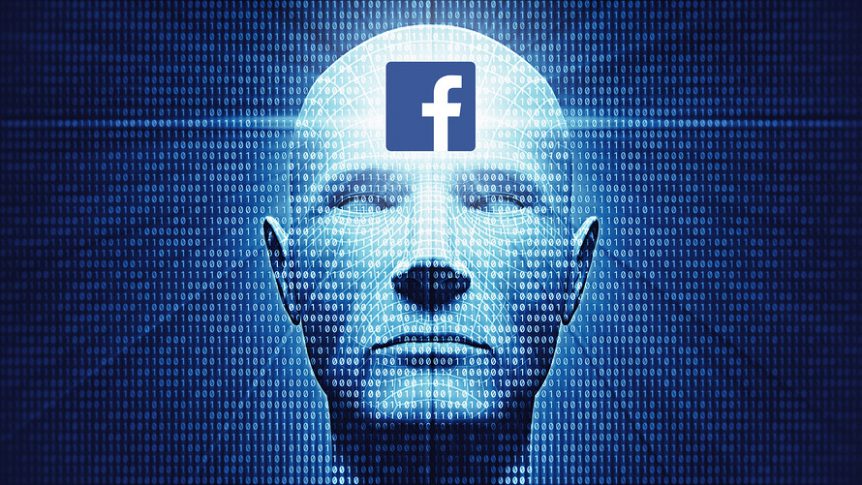 As the power of the “like” grows, political campaigns and companies are harnessing it to influence and track the public’s behavior. Last month, Congress repealed laws passed by the Federal Communications Commission on what data internet service providers could collect on users. In a nutshell: Your browser history could now be sold to advertisers without your consent. If this new rule went into effect, it would allow for “incredibly intrusive data-mining” by companies online, said Cory Doctorow, activist at the Electronic Frontier Foundation, which advocates for online privacy.

Facebook also reportedly knows more about us than most people may realize. The company carried out research on the psychological states of teenagers and found “moments when young people need a confidence boost” that could be used for advertisers, “The Australian” newspaper reported last month. (A Facebook spokesman told MarketWatch at the time that the study was not used to target vulnerable teenagers with advertisements, regretted that this study was carried out and said the contents of this study should not have been shared with a company.)

The influence of the social media giant also came into sharp focus during the polarizing 2016 U.S. presidential election. At that time, analysts suggested the techniques of software and data analysis firm Cambridge Analytica, a company that claims to use data to change people’s behavior, played a role in the results, Motherboard reported in January. The extent to which the company influenced voters has been called into question, but the research it’s based on has broader implications.

Fake news stories trended on Facebook’s FB, -0.27% news feed in the run-up to the 2016 election — an issue the company has vowed to fight. In recent weeks, the social network deleted thousands of accounts as it fights fake news and has undertaken a major advertising effort to help users recognize and report fake news when they see it. (Facebook did not respond to requests for comment on the issues raised in this article.)

But even real news stories can have a major effect when they are shared by users or appear as sponsored posts. Michael Fauscette, chief research officer at peer-to-peer business review platform G2 Crowd, said both sides of the political divide used news stories to target Facebook users in different parts of the country — particularly swing states in the south and midwest — during the 2016 election. Democratic voters who were shown content about candidate Hillary Clinton being ahead in the polls, for instance, may have become complacent and less likely to vote.

But we share far more than we perhaps intend when we check into establishments, share news stories and ‘like’ products publicly on Facebook, studies shows. After you “like” just 10 Facebook pages, advertisers (or political campaigns) can get to know you as well as a colleague, according to research from Cambridge University in the U.K., and after 70 “likes” as much can be deduced about you as a close friend knows. And after 150 “likes”? You’ve essentially given up as much about yourself as your parents know. (Users, of course, can make their likes private).

Michal Kosinski, a data scientist and psychologist who developed these models, said his 2012 analysis of 58,000 volunteers using Facebook predicted a user’s skin color with 95% accuracy. Developed in part by Kosinski during his fellowship at the Psychometrics Centre of Cambridge University in 2008, this model also predicted sexual orientation with 88% accuracy, and political affiliation with 85% accuracy. He worked with fellow Cambridge University student David Stillwell to create a Facebook quiz that could determine specific and unique psychological traits. 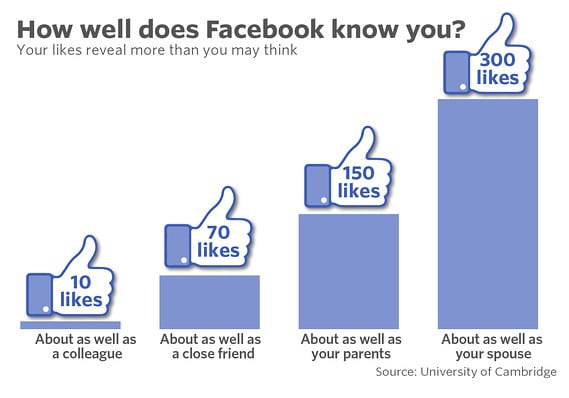 Participants were analyzed through “Big Five” — a well-known system based on five traits developed by two psychologists in the 1980s to categorize personalities. These include extraversion, agreeableness, conscientiousness, neuroticism, and whether or not you are open to new experiences. Soon, thousands of Facebook users had taken the quiz, eager to learn their psychological profile, and Kosinski and Stillwell had — almost inadvertently — aggregated the largest existing network of psychometric data paired with Facebook likes.

From the richness of consumer data and behavior accessible on public profiles on Facebook, they could make predictions more comprehensively and efficiently than any survey before. In the past, to learn about someone’s personality, a quiz might ask them “Are you extroverted?” Now, online behavior monitored by Facebook answers the question better than they themselves can — if they frequently RSVP to events or interact with others on comment threads, for example, they’re more likely to be more social.

“When your digital footprints are being looked at — a lot of which are publicly available and you have little control over — the same accurate psychological profiling can be conducted without your consent, without your knowledge and completely behind your back without your control,” Kosinski told MarketWatch. Advertisers once thought consumers would become desensitized to this lack of privacy, but studies show the opposite appears to be happening: There is a growing desire to be allowed to “opt out” of more invasive targeting. In 2012, 68% of those surveyed by Pew Research Center viewed targeted ads negatively and 59% have noticed this kind of targeting.

Our ‘digital footprint’ can help us too

Despite the recent controversies involving “fake news” and how people may be targeted by marketers and political campaigns, Vesselin Popov, business development director for Cambridge University’s Psychometrics Centre, said these tools were created to “access a history of behavior that might be more accurate than a survey” — and that isn’t always a bad thing. They have potentially life-saving applications in public health — in campaigns to convince citizens to quit smoking or buckle their seat belts, for example.

And as the number of companies that collect our data grows, so too do the tools to fight them. There are many ad-blockers, anti-tracking tools and VPNs (virtual private network service providers) on the market. And there are tools to help the average consumer track what’s being collected about them. Regina Flores Mir co-founded a website called Data Selfie with fellow New York University graduate student Hang Do Thi Duc, which uses the Cambridge “special sauce” formula to allow Facebook users to see what data is being collected about them.

Kosinski noted that many people don’t mind being targeted with more relevant information — but feel cheated when it’s done without their knowledge. He said it’s very difficult to regulate for several reasons: the borderless nature of the internet and the ephemeral nature of personal data. When a car or money is stolen, the evidence is clear — but data is harder to prove, and once it’s in the hand of a company, nearly impossible to get back or erase. (Most online retailers and social networks make clear in their privacy policies that user data is aggregated and will remain anonymous.)

Doctorow, the activist at the Electronic Frontier Foundation, which advocates for privacy, said it is time to put legal framework in place to give back more power — and information — to consumers. In one such case, the EFF could force companies like Facebook to let users breach terms and conditions and set up multiple accounts with fake profiles, allowing them to run their own tests on exactly how news feeds work and companies target them. Americans should be allowed this freedom, he said, “to do what’s best for us rather than what’s best for someone else.”