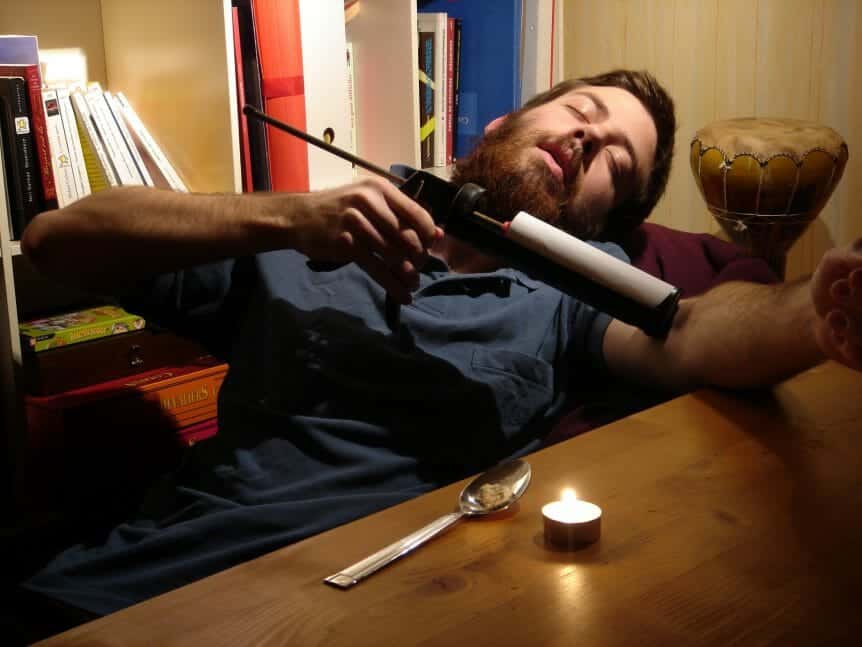 The thing about heroin is that you can’t say anything good about it—at least not in public. That’s what gangly Brit pop singer Damon Albarn discovered when, in a recent interview, he admitted that his experience on the H-train was “incredibly creative” and “very agreeable.” This caused a mild media furor, with various publications crying foul, and commenters completely flabbergasted by how he could think using heroin is anything but the worst thing that could ever happen to a human being ever in the history of horrible things. It’s the same sort of public discomfort that arises when discussing supervised injection sites or doctors being able to prescribe heroin to help addicts lead a somewhat normal life. Heroin = bad, right? For the most part, I see where this comes from—a heroin addiction is a terrible thing. Heroin is an all-consuming drug that can destroy your life, and the lives of people around you.

But my reaction to Albarn’s surprisingly candid admission was more curiosity than shock and outrage. Can heroin really make people creative?

In the echelon of narcotics, heroin has always seemed to me the least creative of drugs. I understand cocaine: You’ve got a ton of ideas—all of which you think are awesome (even though they are not)—and weed makes everything funny. LSD is basically creativity incarnate. But heroin? Based on my admittedly limited knowledge of the drug (i.e., watching Trainspottingand visiting Vancouver’s Downtown Eastside), the only thing I really knew for sure was that heroin addicts often walk around looking super sleepy and itchy. Where’s the artistic genius in that?

I wanted to know more, so I called up Dr. Alain Dagher, neurologist at the Montreal Neurological Institute and Hospital (a.k.a. the Neuro) to find how, if at all, drugs like heroin can help with creativity.

VICE: What can you tell me about the link between drugs and creativity?
Dr. Alain Dagher: There’s a long history of people using drugs for creativity, and different drugs act in different ways. The most obvious example of the way a drug can help creativity is that most of us are, for the most part, inhibited in many ways. Many drugs, especially in small doses, can relieve that inhibition. The best example being alcohol. Low doses of certain drugs like alcohol can cause just enough disinhibition that you can become, in a way, more creative.

What about heroin specifically?
There’s another way drugs can make you more creative, which is going beyond disinhibition. That is, making conceptual links in your brain between things that you may not normally link. So, to a certain extent, this relates to madness—there are many artists whose creativity is almost like madness, but not quite. In conditions like schizophrenia, you have thoughts that are jumbled together that don’t necessarily belong together—you have tangential thinking, and thoughts go in bizarre directions, which might be helpful with coming up with bizarre ideas. Part of creativity is being original. So drugs like cocaine, and perhaps heroin, have that ability to make you have original thoughts.

So heroin can make you more creative?
I don’t know about heroin per se, but in the 19th century people used heroin-like drugs. All the Romantics used opiates. Drugs like laudanum and morphine were commonly used in those days for creativity with the poets and painters.

The surrealists like Andre Breton were interested in madness but also any state of mind that made you not normal. That allowed you to be creative in the sense of being different.

The other side of it is that a lot of people take heroin as self-medication. We use it in medicine as a painkiller. It’s also probably helpful for people who suffer from depression and anxiety. And probably a lot of artists do suffer from that because of what they do.

Why do you think some people are so upset with Damon Albarn’s admission?
There are many reasons. The most obvious one is that drugs—especially heroin—are pretty dangerous. And you would not recommend anyone take a drug like heroin in order to become an artist. Especially heroin, it’s probably one of the worst. It’s extremely dangerous. A single dose can kill you. And it’s easy to overdose. So that’s probably why people are upset, I would guess.

Do you think heroin is getting a bum rap in the same way weed and alcohol once did?
Every drug, except alcohol, has been demonized to a certain extent. If he said he took two whiskeys to help his creative process, nobody would have cared. I have to say, though, heroin is such a dangerous drug that I would never recommend anyone to try it even once.

I want to add that the other thing about creativity is that it’s not just about being disinhibited. And it’s not just forming associations—you have to have a certain amount of talent. You need to not just have ideas, but know what are the good ideas and what are the bad ideas.

So all this is to say that heroin might not make you super creative, but it could help.
I don’t want to come down morally; I’m not an expert in ethics. But I can come down as an expert in brain science. People say that it can help them with creativity, and there’s reason to believe that could be the case. But I want to say that I don’t think it’s a good idea.