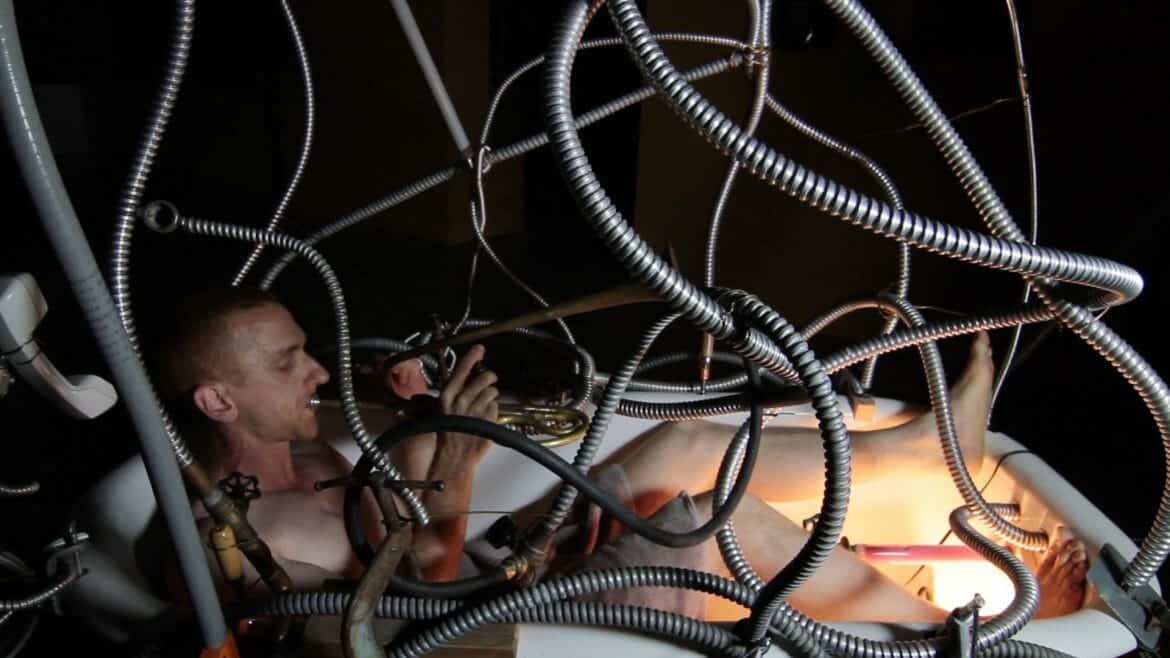 Brian McWhorter is by any measure one of Eugene’s most creative artists. Before returning to town to take a faculty position at the University of Oregon, where he earned his bachelor’s degree, the trumpeter/composer/improviser earned acclaim as a member of New York’s Meridian Arts Ensemble, making guest appearances with orchestras and ensembles around the country.

Yet, for all his career-long success, here we see him on screen, allegedly trying to create a new piece but distracting himself by taking a phone call, fiddling with his trumpet mouthpiece and, he says, “beating my head against the wall, what am I gonna do, what am I gonna do?” Which explains, sort of, why the founder of Orchestra NEXT soon retreats to his workshop, trumpet in hand, and slides into an old, dry junkyard-liberated bathtub bristling with tubing, string, an old telephone handset, an even older horn, valves and — is that a birdcage?

Welcome to the wild world of edgy creativity, and to the documentary film I Live For Art: A Journey Into Meaning and the Creative Process, which plays 9:30 pm Wednesday, Sept. 17, at Bijou Metro as part of the Oregon Independent Film Festival. Starring McWhorter, his sometime collaborator Mark Applebaum (a shaggy-haired composer, Stanford University professor and best/worst living player of a Rube Goldberg-style contrivance called the “Mouseketeer”), Metropolitan Opera trumpeter Mark Gould, UO quantum physics prof Amit Goswami, event producer Elliot Rasenick and storyteller Michael Meade. The film explores creativity as playfully and nonlinearly as its subjects display it.

From the opening shot of a napkin game between McWhorter and Applebaum where they make up the “rules” Calvinball-style, explanation usually appears in voiceover and storylines are interwoven with conversations, interviews, glimpses of classroom talks, Country Fair-style costumed dancing at Oregon’s Beloved Festival, Asian mask theater and more.

Though the film’s multi-track jumpiness sometimes makes the fragmented analyses and storylines a little hard to follow, it also helps avoid talking-head tedium. And I wanted to hear maybe a little less woo woo from Meade and more about creativity involving non-artists like Rasenick.

But even if I Live for Art occasionally flirts a little too closely with the Romantic tortured-artist myth, we learn plenty about the often-labyrinthine process of original thinking — that it usually involves collaboration and interconnectedness, frequent stages of conflict and vulnerability, experimenting and failing, aha moments and self doubt (e.g., Applebaum asks “The question is not ‘Is it music?’ but ‘Is it interesting?’”). The film explores “escaping the restrictions of ego” to get to that well-documented but elusive “flow state” as well as imagination and courage.

The ultimate takeaway? There’s no definitive formula for creativity, but plenty of ways to encourage it. Flaws notwithstanding, the award-winning documentary shows these lessons in action, via Applebaum and McWhorter, whose projects (the sound-gesture-synched performance and creativity-nurturing bathtub, which winds up in an art gallery institution) both turn out to be pretty darn cool, actually. Those lessons apply to everyone, not just artists. “You are not a person,” notes Goswami, who plays the sage role, “until you have an original idea.”