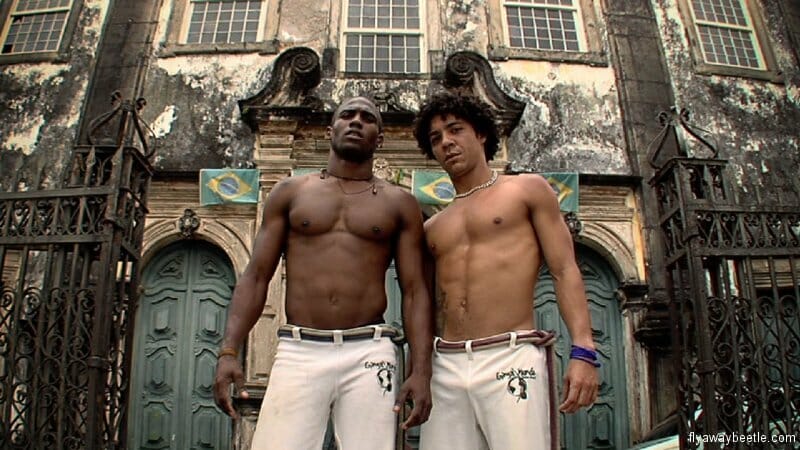 This is a translation from the portuguese review at Portal Capoeira.

During the last decades, we have noticed a significant increase in the production of fiction films and documentaries featuring Capoeira. To be honest, the presence of Capoeira in motion pictures of all sorts is nothing new, even though, in the past, it had been mostly limited to national productions and correlated to other themes of Afro-Brazilian culture. It’s no surprise that the production of films featuring Capoeira would eventually reach other continents, given the process of globalization that Capoeira has been through over the years and the appropriation of the art by the cultural industry. One good example is the Hollywood production, Only the Strong, released in 1993 and premiered in Brazil under the suggestive title Esporte Sangrento (Bloody Sport). As a worldwide phenomenon, the film reached young men and women all over the planet and inspired a whole generation to start practicing Capoeira. 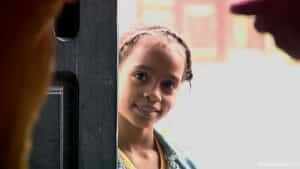 In spite of what movies such as Only the Strong have done to popularize Capoeira on a global scale, what we find really interesting about films featuring Capoeira and other expressions of Brazilian popular culture is their ability to produce an esthetics of performance full of tropical exoticism, which has been constantly re-invented over the years. For instance, where would Samba be today without the prominent figure of Carmén Miranda, who helped project the music style beyond Brazilian borders, conferring it the status of one of the symbols of our national identity. During the 1930s, Miranda participated in two important films, A Voz do Carnaval and Banana da Terra, in which she sings the famous song, O que é que a Baiana tem? (What does the Baiana have?), by Dorival Caymi. The same happened with the Tango, for instance, which had its Argentineaness reinforced through the films of Carlos Gardel, during the first half of the XX century.

Samba and Tango are good examples of how the phonographic and cinematographic industries have converged to exploit and promote symbols of popular culture, bringing audiences to the theaters, on the one hand, and selling records, on the other. Thanks to its ambiguous character – a blend of martial-arts, dance and music – it has been no different with Capoeira. Judgments aside, it’s nothing new to say that the arts in general have used Capoeira and other expressions of Brazilian popular culture as elements of artistic exploitation, at the same time that they re-invented a new esthetics of these cultural forms. Need some examples? Just take a look at the paintings of Carybé and the photography of Pierre Verger.

As for the film industry, we could point out a number of national and international productions featuring Capoeira as their flagship: Vadiação, Dança de Guerra, Cordão de Ouro, Only the Strong, A Capoeira Iluminada, Mandinga in Manhatam, and Besouro, to name a few. Fly Away Beetle appears in the sequence of these films. In a way, it is an extension of all of them, especially those in documentary format, even though it seems to pull back from traditional documentary style. 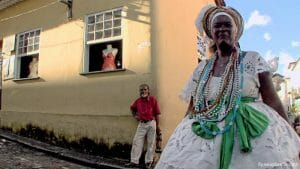 The film brings the testimony of three renowned masters, Boca Rica, Olavo dos Santos and Cobra Mansa. It also shows the true story of Roque Batista, a young men living on the streets of Salvador, Bahia, who turns to Capoeira in order to save himself from destitution. The story is not at all unknown for us, capoeiristas: Capoeira as a tool for self-transformation and for bettering one’s life, and the strong connection of the art with the magical city of Salvador da Bahia, Mecca of Capoeira and epicenter of Afro-Brazilian culture.

Besides the renowned masters, Roque Batista and two of his young Capoeira students, Fly Away Beetle also features other characters which, in spite of not having a particular identity in the documentary, perform a very important role for the underlying discourse of the film. We are speaking of the capoeiristas which during the action shots perform blows and acrobatic moves in typical Contemporary Capoeira style. The exposure of the half-naked bodies and the urban/natural scenario of Salvador highlight a tropical-mulatto type of aesthetics. Most of these scenes take place outdoors, at some of the famous sights of the city and in public spaces, where kids play soccer, the baianas sell their products and Capoeira coexists.

Within the broader context of the film, the above scenes contrast with the testimonies of the older masters who, through their own stories and memories, take us back to a time when Capoeira was persecuted, devalued, marginalized and despised by society. It is through this correlation between beautiful Capoeira shots and the crude reality of its early stages – expressed though the testimonies of mestres Olavo and Boca Rica – that Fly Away Beetle presents us with a paradox and, certainly, what the film has of most important. A practice developed by enslaved Africans in Brazil and their descendants – just like Samba and other cultural practices not long ago derogatorily classified as “negroes’ pastimes” – completes its transition between opposite extremes. Capoeira is no longer seen by the elite as “one of the indications of our inferiority as a people”. It has reached the artistic scene and become one of the symbols of our national identity. Nonetheless, it is through the story of Roque Batista that Fly Away Beetle reminds us that, even though Capoeira has reached Hollywood, the Afro-Brazilian population continues to be confined to poverty, destitution and marginality, needy of social projects or of a “lifeline” such as Samba, Football and Capoeira to save them from social exclusion.

Additionally, it is worth mentioning the parallel between Fly Away Beetle and the myth of Besouro Preto or Black Beetle – the magical Capoeirista who would turn into a beetle and fly away whenever in trouble. The legend of Besouro recently reached the screens of theaters in Brazil with the film Besouro. Besouro takes place in the old Bahia, and it introduces us to mestre Alípio who, just like Olavo, Boca Rica and Cobra Mansa, represents the figure of the old master, keeper of the traditions and master of Besouro. In the film/myth, Besouro spends most of his time in the wild tropical forest, where he encounters the spirits of nature and Afro-Brazilian Candomblé. The Besouro of Fly Away Beetle is Roque Batista, and its wild forest is the urban jungle of Salvador, full of dangers which can lead one into social disorder, chaos and marginalization. Roque’s magical element of metamorphosis of man into insect is Capoeira; magical, black, racially mixed, tropical, ancestral, and ritualized in a world ever more secularized.

In spite of such obvious deconstruction, it is important to emphasize that Capoeira has indeed made a great contribution to social projects with the objective of promoting the social inclusion of Afro-Brazilians and the strengthening of their self-esteem. Roque Batista is just one of the many Afro-Brazilians to whom Capoeira has given life, either because he left behind a possible tragic end to become one of the disseminators of the art, or because Capoeira has enabled the cinema to reconstruct his narrative on screen.

The conversion of popular culture into an aesthetic object is a magic that the cinema knows how to do well, especially when sweetened by the no less mystical Capoeira of modern times. It’s no surprise that the European premiere of Fly Away Beetle took place in two great post-colonial metropolises, Lisbon and London, where global audiences consume what is produced in the periphery of the world. After all, Roque and Roll are global products.

Ricardo “Cangaceiro” Nascimento is a geographer, Master in Sociology of Culture, Capoeira instructor, and is currently completing a PhD in Anthropology at the University of Lisbon.